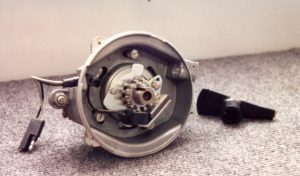 In the 1970’s Jaguars flagship engine, the 5300cc Double-six V12 engine was fired by an electronic system designed by Lucas.  Although the system did function, it was by no means a powerhouse ignition system.

Since this system was known to be inadequate, I chose to redesign the ignition system using more state of the art technology. A reluctor was designed, machined and fitted to the original housing of the Jaguar 5300cc V12 distributor. An electronic pickup system was installed in conjunction with the new reluctor and was coupled with a MSD 6A ignition box.

The Jaguar 5300cc Double-six engine was now alive and able to provide a clean and efficient fuel burn all the way to redline.

This site is currently under construction. Some sections may not be active. Please bear with us as it becomes operational.